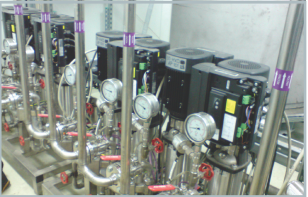 BOT Elektrownia Opole S.A. is the most modern hard coal fuelled power station in Poland. It runs four energy power generating units which were commissioned already during the years 1993-1997. As the construction of the generating units progressed, the power plant was equipped with environmental protection equipment to control and reduce NOx emisssion in order to meet all limit values of national and EU environmental legislation.
For NOx emission control, the power plant runs more than 10 Grundfos CRNE multistage pumps delivering solution water and urea which is sprayed through nozzles into the power plant's flue gases before they are released to the environment. The objective was to intergate these pumps into the plant´s existing Profibus-based main process control system.

Solution
The existing data communication system was extended by installation the Grundfos
CIM/CIU 150 standard Interface (see figure below), which supports the Profibus device profile “Intelligent pumps”. It allows a direct data transmission between a PLC or SCADA system and a Grundfos pump or controller via Profibus DP. No custom programming is needed to integrate the interface modules in an (existing) Profibus network.

Conclusion
The power plant´s NOx emission control system is now optimized and secured: Whenever the pumps, for any reason, stop running and consequently the NOx concentration of the flue gas increases and finally reaches the limit value, the control system will immediately stop the complete power block to avoid severe air pollution problems.