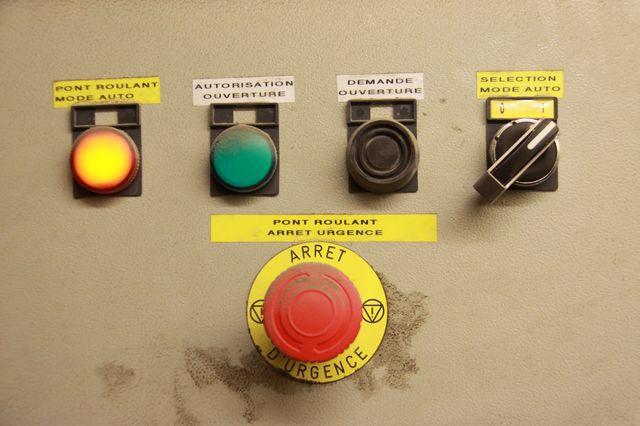 he Holcim cement plant in the Eclépens municipality (canton of Vaud, Switzerland) operates 24 hours a day and over 300 days a year as very much function-oriented plant.  At the heart of the plant, a traveling crane plays a key role in the production process, linking (a) the breaking down of raw materials process in the rock crushers with (b) the burning of the material in the rotary kilns at 1450° C. This giant crane has been used before at a subsidiary plant of Holcim in Italy, then returned to Switzerland, re-built and finally put into operation in the Eclépens plant. Part of the rebuilding of the crane was its automation including a special emphasis to safety aspects of people and equipment.

The task of automating the traveling crane was given to ONLINE Automation S.A. , which had prior experience in this field. After a complete overhaul, the control cabinet was ready for use in automatic operation. The RFID system, which enables correction of non-preventable crane slippage, was installed in collaboration with Stefan S.A. of Givisiez. Sensors were positioned every 2 to 3 meters on the traveling crane. "One of the major advantages is that all safeguards of restricted zones are software-controlled," said Daniel Roth, Managing Director of ONLINE Automation.

The Holcim Standard S7 was chosen for the hardware portion. PROFIBUS DP connects the I/O devices of the traveling crane, while PROFINET is used for communication with the stationary equipment in the hall. In both cases, WAGO supplied the standard remote I/O and the safety devices based on PROFIsafe.

Besides the option to use wireless communication, the PROFINET standard provides a vertical architecture between the control room, the programmable controllers, and the remote I/Os in the field. The controller mounted on the traveling crane communicates with the safety input/output modules installed in the control cabinets in the hall via a WiFi connection. It is possible to access the controller and the configuration of the safety equipment from the control room. The TCI technology  (Tool Calling Interface) as well as a routing option (Tool Routing) of the programmable controller are used for parameter assignment of the PROFIsafe safety inputs/outputs of WAGO. The data are transferred via the LAN from the programming device to a controller, which outputs the parameters to the I/O modules that are connected to PROFIBUS. This interesting solution offered by WAGO for the PROFIsafe modules provides a major advantage during commissioning and maintenance of the system.

Particular importance has been placed on safety of personnel. The risk analysis was performed directly by Holcim. The introduction of the PROFIsafe system enables the management of all “Emergency Off” disconnections and door contacts. For this purpose, the clinker hall was divided into two different areas: one that is accessible for vehicles that convey the raw materials and another where the machines that form the cement are charged with a clinker mixture of lime and gypsum. All doors are equipped with Emergency Off disconnections. As soon as an Emergency Off is triggered, the traveling crane comes to a standstill immediately.

One of the main innovations is the operating mode. Normally, the safety relay is wired using an electromechanical component that interrupts the connection when tripped. In Eclépens the traveling crane is driven by a safety controller with programmed logic. As a consequence, the wiring expense is much less. "In addition, we also have the advantage of the ability to access the parameter assignment of the various modules from the programming station via Ethernet and, namely, independent of the fieldbuses," said Stéphane Rey, Product Manager for Industrial Automation at WAGO Contact SA.

The positioning commands of the traveling crane are transmitted directly to the programmable controller by the "O_Stock" application program developed by ONLINE Automation. With the help of a database and optimized algorithms, the EDP (Economic Development Program) application efficiently manages the inventory of bulk materials that arise due to the flow management in the hall. The system has three operating modes: automatic mode, operation via remote control (equipped with safety products), and via the cab operator's seat. In automatic mode, the operations can be visualized by cameras and monitored from the control room. This enables protection of operating personnel from dust and processed products. Daniel Gremion added: "This solution saved us one full-time employee."