"Plug and Play"? Modular automation technology in the automobile industry 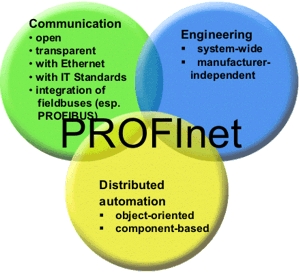 Following the successful trial of PROFINET at the technical training facility of the Dürr company, the first production system was commissioned at VW in Wolfsburg, Germany, in March 2002. This project involved networking over sixty independent, intelligent devices via PROFIBUS and Ethernet. The communication relationships were planned purely graphically. The modular approach allowed essential savings to be achieved in engineering and commissioning.

Today's automation landscape is undergoing a fundamental change caused by information technology and driven by the ongoing upward pressure on costs. This change is defining new automation structures and principles which open up convenient capabilities in goods production. What is of central importance in this respect is further development of automation technology leading to open, distributed automation systems. This further development is based on the demands frequently made by users for openness and universality and the wish for ease of use of the technology which is becoming increasingly more complex. The benefits for the user relate to time and cost savings when preparing and operating the machines and systems.

Machines and systems can generally be easily split into autonomously operating sub-units which are able to coordinate with each other using a manageable number of handshake signals. Such sub-units are considered as technological modules consisting of mechanical system, electrical/electronic system and user software.

PROFINET is based on an object-oriented modeling of technological modules. On the basis of the object model, machines and systems and their parts are considered as technological modules whose functionality is encapsulated in the form of PROFINET components. Outwardly, these PROFINET components are accessible via uniformly defined interfaces. They can thus be connected as required. A distributed automation system designed in this way allows modularization of systems and machines and, thus, reuse of such modules.

Based of this, PROFINET specifies an open, object-oriented communication concept which is based on mechanisms such as TCP/IP which are conventional in the Ethernet sector. The DCOM Wire protocol which allows communication of applications on an object basis was implemented using this basic mechanism.

Dürr, the trend setter in technology
The Dürr technology group is one of the world's leading providers of production systems and in-production services for the automobile industry and its component sup-pliers. The Paint Systems Division plans and installs entire paintshops for automobile manufacturers throughout the world. The product, process and project know-how in painting technology, application, materials handling and environmental engineering which has grown over decades has been integrated by Dürr to form tailor-made overall solutions and has been successfully based on the modularization concept for years now. "Dürr EcoDIM" is the Distributed Intelligent Module control system for the 21st century which is now in use at VW on the basis of PROFINET and distributed automation. 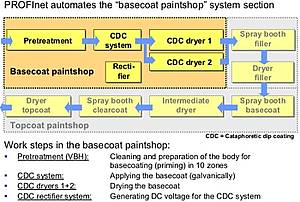 The advantages of modularization relate to the reduction in design time, ongoing cost reduction, quality assurance (Dürr pursues a zero-defect concept) and simplification of complex structures.

In modular plant construction, each plant section forms an autarkic module consisting of the mechanical system and the electrical / electronic system, the system's own control intelligence and the system's own user program. This is made possible by intelligent field units or peripheral units with their own CPU.

Flexibility thanks to modularization

Systems with a modular structure can be expanded more easily and are easier to maintain thanks to manageable functions. Updating the software of specific modules can also be done with no risk of undesirable effects on the other system sections.

For instance, thanks to modularization, the Dürr 'EcoCure' dryer systems are flexible and maintenance-friendly. The flexibly combinable dryer modules are combined depending on process-engineering targets and supplied fully preassembled to the con-struction site. The modular design speeds up not only the installation procedure but also commissioning of the systems. Not least, the modular concept simplifies quality management, allowing a uniformly high quality to be guaranteed more easily.

Distributed automation based on PROFInet has made it possible to implement modu-larization consistently and to reduce complexity of the system. The new engineering tools such as Simatic iMap play an important role in this. These tools mean that the communication relationships between intelligent units no longer have to be explicitly programmed but can simply be planned graphically.

A new basecoat area with Dürr EcoDIM has been implemented on the basis of dis-tributed automation in shop 9 at Volkswagen (VW) in Wolfsburg. The basecoat area consists of pretreatment, cathodic dip coating (CDC) and a dryer for gradual drying of the base-coated bodies.

The individual system sections are implemented as autonomously operating techno-logical units. A continuous-flow dryer consists, for instance, of the following modules:

Each of the EcoDIM modules contains a distributed Simatic ET 200S peripheral unit with its own CPU. They have been programmed with Step 7 and are networked via PROFIBUS.

PROFINET uses the software component technology which has been time-proven in the IT environment. Programming of the internal functionality of the individual technological modules is separate from engineering and project planning for communication. The entire functionality of the technological module is now mapped and encap-sulated in a related software component, the PROFINET component. Access to the interface of this component is uniformly defined with PROFINET. Precisely those variables required for interplay with other components for visualization and for interwork-ing with the management level are provided at the component interface for engineering communication.

On the system for VW Wolfsburg, each Simatic ET 200S peripheral unit was firstly programmed with Step 7. The input and output variables of the component interface were then defined from a technological point of view in a data block, e.g. 'Open roller shutter door', 'Roller shutter door is open' and 'Entry stop' etc. Finally, an XML file which describes the entire component in standardized form pursuant to the PROFInet conventions, including a reference to the related Step 7 project, was generated on the basis of this information using the 'Create PROFINET component' Step 7 function.

The components of all EcoDIM modules were then imported to the Simatic iMap en-gineering tool which offers a technological view of the entire system. The communication relationships between the components are defined graphically with the engineering tool.

In order to do this, the components must then be arranged from the library by dragging and dropping them on the connection plan where they are represented with their technological interfaces independently of the bus system used. The communication relationships between the technological interfaces of the components are then defined by dragging lines. This graphical linkage of the inputs and outputs of the components instead of complex communication programming greatly reduces the time taken both for the implementation phase and for the commissioning phase. Overall, over sixty intelligent components were interconnected in this project.

The Simatic Net PROFINET OPC Server on PCs is used for visualization of the entire system with approx. 30,000 variables. The variables for visualization were planned, as were the communication relationships, with Simatic iMap (the variable list is the OPC tag file in this case).

Interworking of the PROFIBUS segments with the Ethernet network is performed via Ethernet/PROFIBUS links with PROFINET proxy function (Simatic Net IE/PB link). These IE/PB links operate as proxies for the intelligent PROFIBUS units with respect to the Ethernet units. The advantage of this concept relates to the fact that the existing extensive range of intelligent PROFIBUS units, such as the ET 200S in this system, can be used without adaptations. The unchanged DP protocol is used for PROFIBUS and the new PROFINET communication mechanisms (TCP/IP and DCOM) are used for Ethernet.

Time saving in engineering and commissioning
For the Dürr company as a plant and systems house, PROFINET is a further step towards consistent modularization and decentralization. Reusability of the technological modules has made it possible to save both time and money in engineering, design and commissioning thanks to the copying effect. The possibility of using the time-proven PROFIBUS products was particularly important in this for Dürr and the system operator VW.

The bodies for the Golf, Lupo and Touran have been produced in the system since March 2002. Availability of the system which now operates in three-shift mode has been guaranteed at all times. 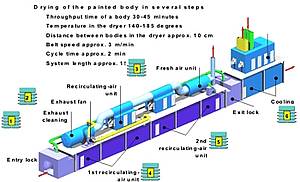